The North Carolina Solar Center (now the NC Clean Energy Technology Center) was awarded a contract from the U.S. Department of Energy (DOE) in 1995 to build a Database of State Incentives for Renewable Energy. Over time, the DSIRE project became much more than just a database. We have produced policy maps that have been used by others in countless presentations, policy reports, a Solar Policy Guide, and newsletters, all while providing technical assistance to thousands of homeowners, businesses, solar companies, policymakers, and advocacy groups. This page provides a look at the 20-year evolution of the DSIRE project as its scope expanded and trends in web design came and (thankfully) went. 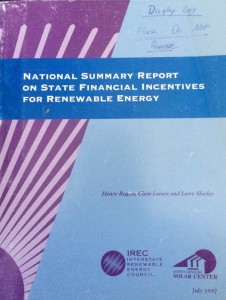 Before DSIRE went online it was available for purchase in hard copy and floppy disk. The National Summary Report on State Financial Incentives for Renewable Energy and The National Summary Report of State Programs & Regulatory Policies for Renewable Energy were sold separately for $25 for state and federal agencies and nonprofit organizations, and $50 for everyone else.  And for $25 anyone could receive the DSIRE on Disk Database Application. In addition to DSIRE being different in the late-1990s, the policy and incentive landscape was quite different with just 118 state-administered financial incentives across the country in 1997. Additional Summary Reports were later published with information on policies and incentives offered by local governments and utilities. 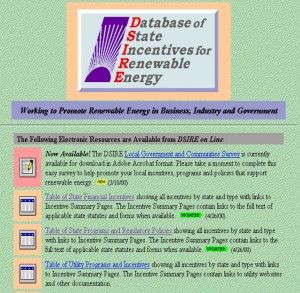 DSIRE went “on Line” in 2000. For the first time anyone could access our summary tables and individual policy summaries while enjoying our beautiful color scheme. The scope of technologies included in DSIRE continued to be limited to just renewable energy.

2002 – 2009: DSIRE Introduces Map Interface and Expands to Include Efficiency Technologies 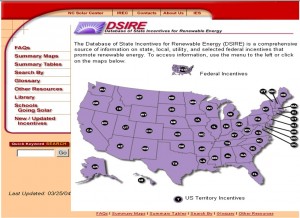 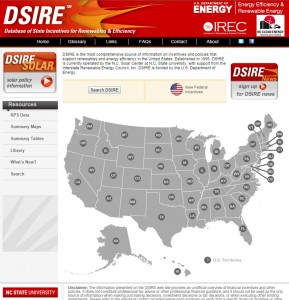 DSIRE experienced its second major overhaul in 2010. In addition to a more modern design, users were able to filter the content of the database by multiple criteria for the first time. This time period also saw tremendous growth in policy and incentive activity across the country with the number of program records in DSIRE increasing from fewer than 2,000 at the start of 2010 to nearly 2,800 by the end of 2014.